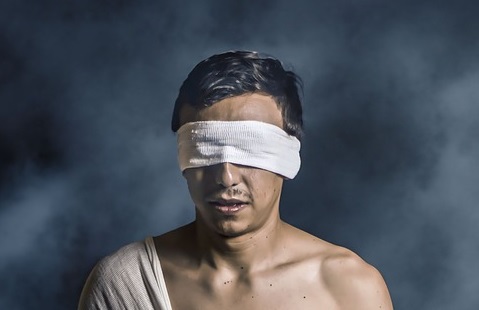 My wife and I recently had similar dreams in which God showed that many people were either indifferent or lacked knowledge of the signs he is sending. The following is her dream,

I had a dream on the morning of the 29th of July which began with me walking in an open field on a sunny day. The sky suddenly started changing. It seemed to break out into bits. It seemed like fireworks at first but there was no sound. There were different colors bursting out and spreading in the sky. Nothing was falling to the ground. I then started panicking because I knew something was wrong. It felt like the beginning of something worse coming through. I started looking for Jason so that we could flee. People around me were not as shaken as I was.

The scene in the dream then changed and I was at work, some men came to office with plates of food and they asked for juice. I was not at peace. I left these men and stepped out of the building to make sure I was still safe. The men were not concerned about anything. All seemed well with them. I got back to office gave them juice and left. The atmosphere outside was scary, it felt like war was about to break out and I kept moving, with a group of people I didn’t know. End of dream.

On the morning of the 17th of August, I also had a dream in which I was outside a long building on a small hill with several people. The building was a classroom block. It was dark as though it was night and there were large locust like creatures that may have also been human like that kept moving down and touching the ground and flying back up into the darkness near where we were. They seemed not to be so many. From outside the classroom I looked through a window into the classroom and saw my wife seated at a table. We who were outside were then instructed to move to the other side of the building which we did. I then heard a dog some distance away in the dark whining as it was being attacked by these creatures from the air. I vaguely perceive several of the creatures coming down and tapping the dog one at a time after which each went back into the air. This worried me as I felt the creatures were moving towards us and were harmful. I thought to myself that these were the locusts talked about in the book of revelations (chapter 9) in the bible. I went back to the side of the building we were at initially. I started looking for my wife to instruct her to go to a nearby building where we had a room so that we could shut ourselves in for safety. Two people were seated with a baby by the building side. This baby was ours. I hesitated to get the child and I vaguely remember someone helping me get the child and giving him to me. One of the people seated had eyes that looked unusual, with pupils that were almost slits like those of a reptile. I then moved with the child towards the nearby building for safety. All through the experience, the people I was with were not concerned about the locust like creatures. End of dream.

My wife felt that her dream was showing that despite many signs from God about the coming tribulation and judgement, many either don’t know what is going on or are indifferent. Her dream portrayed several things Jesus said about the last days.  Jesus said that there would be signs in the heavens during the season of his return that would cause some to be apprehensive about what was coming.

“There will be signs in the sun, moon and stars. On the earth, nations will be in anguish and perplexity at the roaring and tossing of the sea. People will faint from terror, apprehensive of what is coming on the world, for the heavenly bodies will be shaken. Luke 21:25-26

Yet at the same time Jesus indicated that it would still be possible to entirely miss the signs and continue living life while being unconscious to the approaching judgement.

My wife’s dream showed people who were taken up by the cares of this world, eating and drinking oblivious to what was about to occur. She could not participate fully because of her awareness of Gods warnings. People are indifferent to God’s warnings and some even go as far as mocking them. This seems to be the same theme in my dream because people were inattentive to the end time events that were very near and about to affect them. One such event is the release of locusts from the bottomless pit onto the earth. These according to revelation 9 will be accompanied by darkness and will have human faces. They will torture people on the earth.  All these elements were in my dream. My awareness of the locusts and their approach in the dream represented the awareness of the time brought about by the signs and revelations given by God in the last few years. The baby may have been representing those whom are not yet spiritually mature whom we are supposed to mentor and guide out of worldly living and help them see things the way God does.

The only way of escape from the coming tribulation is the rapture where all those who believe in Jesus and are faithfully serving him would be changed and removed from the earth suddenly and quickly at a secret time of Gods choosing. Both dreams represented the rapture by our flight from danger.

“Be careful, or your hearts will be weighed down with carousing, drunkenness and the anxieties of life, and that day will close on you suddenly like a trap. For it will come on all those who live on the face of the whole earth. Be always on the watch, and pray that you may be able to escape all that is about to happen, and that you may be able to stand before the Son of Man.” Luke 21:34-36

If you have not given your life to Jesus, please click here. If you have already accepted Jesus as your Saviour, faithfully serve him and gently warn others of judgement that is coming. Pray for fellow believers who don’t see or understand these things.This is our responsibility and we will be held accountable.

If you have doubts about the signs and dreams that have been shared here or by others, pray for confirmation from the Lord. I am a hundred percent confident he will respond accordingly. When he does, feel free to share in the comments section below.